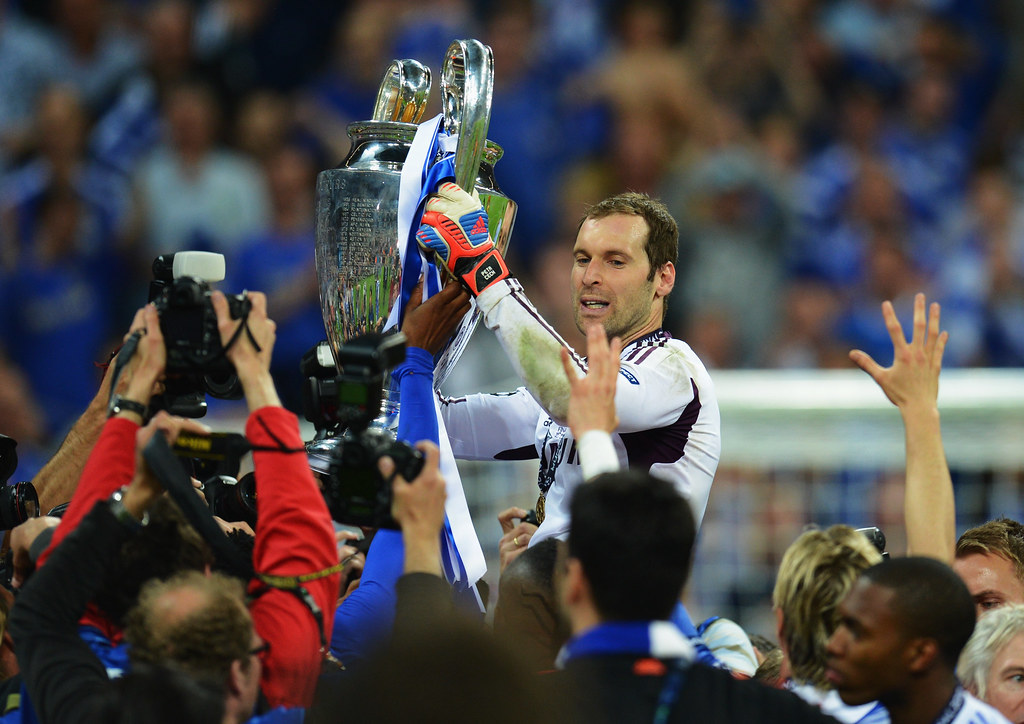 Former Blues goalkeeper and Arsenal’s shot-stopper is bowing out of professional football on Wednesday and will be long remembered for his dominance between the posts.

Petr Cech will bring down the curtain on a glittering playing career in strange circumstances as the Arsenal goalkeeper faces his former and potentially future employers Chelsea in the Europa League final on Wednesday.

Chelsea had only won one top-flight league title and five cups in their entire history before Petr Cech arrived at Stamford Bridge in 2004.

At £7 million, the then 21-year-old was far from being the only arrival during the summer when Roman Abramovich and his millions changed English football forever.

The youngster had to wrestle the goalkeeping jersey away from Chelsea’s Player of the Year Carlo Cudicini. However, he did so with ease and soon established himself as not only the best goalkeeper at the club, but also the best in the Premier League.

The 24 clean sheets he kept during the 2004-05 season remain a Premier League record, as the Czech Republic legend proved a formidable last line in Jose Mourinho’s impenetrable defence.

Chelsea and Cech romped to successive Premier League titles and such was their brilliance that Sir Alex Ferguson had to raise the bar to compete at Manchester United.

Cech’s most significant moment was not in English football, though, but in Europe, where he saved a penalty in extra-time to deny his former team-mate Arjen Robben in the 2012 Champions League final against Bayern Munich. The match in Munich ended 1-1 after 120 minutes and he was the ultimate hero, alongside Didier Drogba, after saving two further penalties in a shootout.

Chelsea became the first club from London to win the Champions League that day, and Cech now has the chance to close his career with yet another European trophy – only this time against the Blues. The Arsenal goalkeeper will make his final bow in the Europa League final in Baku on Wednesday.

The 37-year-old has been in talks to return to west London in a behind-the-scenes technical role, but there can be no doubt that his sole focus right now is on winning on May 29 for the Gunners and his close relationship with Chelsea owner Roman Abramovich looks set to see him return to the Blues in the coming weeks as the club’s new sporting director.

Cech lost his status as Arsenal’s number one during Unai Emery’s first season in charge, with Bernd Leno taking over in the Premier League since September, but the Czech veteran has started all of Arsenal’s knockout games to reach the Europa League final.

The success of Arsenal’s season depends not only on lifting a first European trophy for 25 years in Baku, but also on ensuring Champions League qualification that will come with victory.

Emery therefore has the difficult decision on whether to give Cech a fitting farewell, or make the cold but calculated choice of playing his first-choice ‘keeper in Leno.

“I’ll make a decision about my future after the last game,” said Cech as news spread about his imminent return to Chelsea. “Now my sole focus is to win the Europa League with Arsenal.”

Emery believes Cech has the experience and professionalism to shut out any distractions arising from a potential return to his old club.

A MAN OF MANY TALENTS

A man of many talents, the Czech speaks five languages and his love of the drums saw him release a charity single earlier this month alongside Queen drummer Roger Taylor.

However, it was on the field he truly shone despite a horrific head injury in 2006 that fractured his skull and briefly threatened his life.

After emergency surgery, Cech returned to the field just three months later, but had to sport his now trademark helmet to protect his skull from further damage for the rest of his career.

It did not hold him back as Cech proved a reliable last line of defence during a decade in which managers came and went at Stamford Bridge.

His crowning glory came saving penalties in extra-time and the shootout as Chelsea upset the odds to finally lift the Champions League in 2012, beating Bayern Munich in the final.

The Europa League followed a season later, but Thibaut Courtois’s return from a three-year loan spell at Atletico Madrid saw Cech lose his place as Jose Mourinho’s number one.

Another player may have been forced to look further afield for a new club, but Cech’s close relationship with Abramovich saw the Russian billionaire clear the way for a move to Arsenal.

Cech has not hit the same heights at the Emirates as in his early days at Chelsea, but still went on to become the first goalkeeper to register 200 Premier League clean sheets, reflecting his consistency over 15 years.

One more chapter of a fabulous career could still be written in Baku before Cech hangs up his gloves.

“My last dream was to play this European final with Arsenal and the last step is to win it,” he told media.

GREATEST GOALIE IN THE PL

Former Blues goalkeeper Matej Delac believes that Cech is the greatest goalkeeper to ever play in the Premier League, although he adds that there is much more to him than what you see on the pitch.

“Petr helped me a lot, especially the first two years when I arrived,” Delac told Goal. “Everything was new to me and it was not easy to adapt to English football when you come from the lower divisions in Croatia. So he helped me with advice and everything.

Delac on Cech “He even found me a club [to go on loan to] in the Czech Republic. It was he who found me the club. Yes, he helped me a lot. I am still in contact with him. He is a very important guy in my career.”

One criticism that has been levied on Cech and other Blues greats like John Terry and Frank Lampard is that they used their player power to get rid of Chelsea managers that they did not like.

Many of Cech’s former Chelsea team-mates are going on to achieve great things in their post-playing days.

Lampard is one such man, reaching the Championship play-off final with Derby County in his first season as a manager. The former midfielder has spoken out against this accusation of player power.

“The strength was that the dressing room wanted to win and had a real desire to be winners,” Lampard told Goal. “That’s certainly what I want in a dressing room, as a manager now. It is a very cheap and easy statement to say a problem at Chelsea is player power.

“Chelsea is a club that has changed managers. It is a club that demand results. I think rightly so, it has gone into that bracket now and it has a way of working. I think as a player, all I would worry about is what I did every week. Was I at my best?

“All John Terry worried about was that. Didier Drogba, Michael Ballack, Petr Cech and Ashley Cole. They were all great professionals. So if you call having strong personalities player power, then I think that’s a cheap and easy way to look at it.

ROLL OF HONOUR AND ACHIEVEMENTS Cech’s roll of honor and achievements from his career is enviable. Four Premier League titles, five FA Cups, three League Cups, a Champions League, Europa League, UEFA Under-21 Championship, a record 124 caps for the Czech Republic, a nine-time Player of the Year in his country, a record 202 Premier League clean sheets – the list goes on and on. Cech retires on Wednesday as an all-time great of the game – and perhaps the best goalkeeper to have played in England.