The ghost of Kiambaa massacre is still haunting The Deputy President William Ruto.

Youths rampaged in the Rift Valley’s Kiambaa village , attacking the Kikuyu tribe of President Mwai Kibaki who was declared winner of a December 27 poll that critics say was rigged.

The mob shut dozens in a church, blocked the door with a mattress and set the church on fire, residents said. 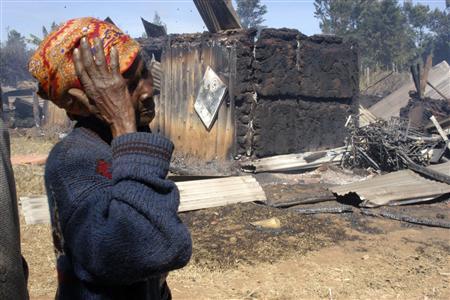 Around 30 people burned to death while the attackers chased others into the surrounding fields, hacking at them with machetes. The brutal act still haunts DP Ruto. Team Kieleweke is now capitalizing on that to hit on him.

The Kieleweke which has warned DP Ruto not to set a foot in Kiambu has re-ignited the memories of Kiambaa massacre.

“You are not welcome in this county unless you are accompanied by Uhuru,” said former MP George Nyanja.

The former MP asked: “How can someone go to another person’s home without his knowledge?”

He took a swipe at the DP who has been crisscrossing the country for church fundraisers asking him to prove his seriousness to work of God by rebuilding churches that were destroyed during the 2007 post-election violence.

“Kiambaa church was burnt during the post-election violence. People died inside and others were left with permanent scars, let the DP build that if he is honest about his church fundraisers,” he said.

DP Ruto was implicated in the ICC case with the brutal Kiambaa massacre being among the key evidences that allegedly linked him to the case.