The Ugandan foreign ministry described the incident as being of “serious concern” calling it an “incident of murder”.

“The government of Uganda protests in the strongest terms the violation of its territorial integrity by Rwandan soldiers and the criminal, brutal and violent act… against unarmed civilians,” it said.

Rwanda Foreign Minister Richard Sezibera, however, dismissed the incident on Twitter as untrue.

No crossing of borders…. https://t.co/TugdjYNGLx

“Fake news: no such thing happened,” he wrote, adding that a detailed response would be forthcoming.

Relations between Rwanda’s Paul Kagame and Uganda’s Yoweri Museveni, once close allies who backed each other into power, have turned deeply hostile in recent months, with the pair making allegations of espionage, political assassinations and meddling against each other. 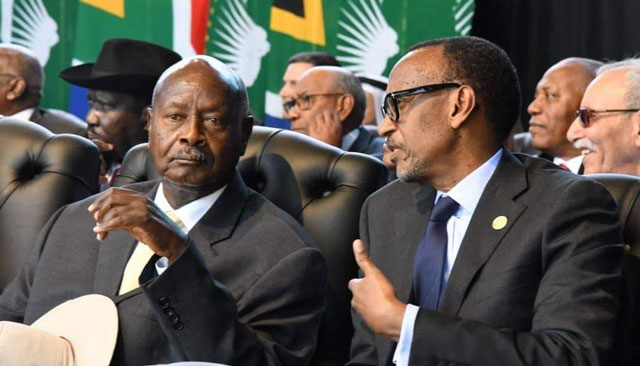 Two Rwandan soldiers entered Ugandan territory in the southwestern district of Rukiga on Friday in pursuit of a suspected smuggler, the Ugandan Foreign Affairs Ministry said on Saturday.

In a statement, Rwanda National Police said Rwandan security forces were attacked by people with machetes after stopping the suspected smuggler on a motorcycle after he crossed the border from Uganda.

“The officers shot two people, one Rwandan, who died instantly and one Ugandan who later died,” it said. “The incident happened in Rwanda.”

Ugandan police said earlier the raid occurred around 8:00 pm (1800 GMT) on Friday at a border post near the Ugandan village of Kiruhura in Rukiga district in the west of the country.