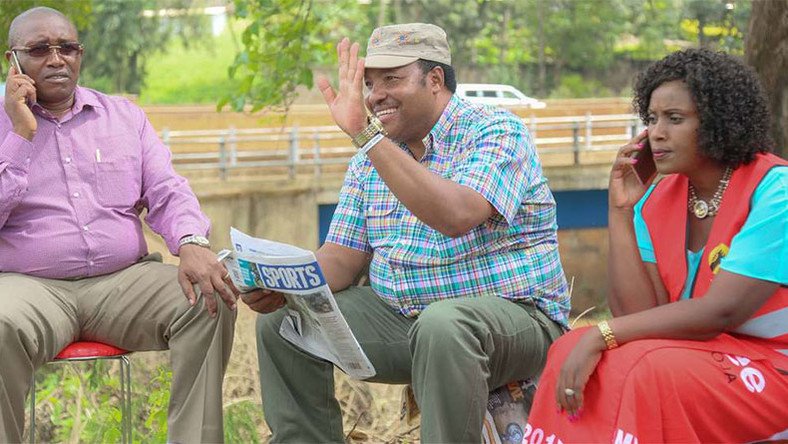 His Garden Estate and Runda homes were raided. Waititu has been on the spot over his bizarre budget that left the Moses Kajwang-led senate committee wondering how the county chief allocated funds to the statehouse functions.

But are these the only funds in question? Are Kiambu County matters the only issue being investigated?

Well, Baba Yao has some behind the scenes laundering schemes that should be questioned.

Controversial businessman and preacher, Bishop David Kariuki Ngare popularly referred to as Gakuyo, has now blamed Kiambu Governor  for the collapse of his Ekeza Sacco.

Gakuyo said Waititu was fighting him because of the role he had played in the election of the Kiambu Governor.

He claimed to have contributed Sh400 million towards Waitutu’s campaign from his private campaign, Gakuyo Real Estate, adding that the Governor had started sabotaging his businesses after taking power.

“I gave Waititu Sh400 million from Gakuyo real estate but when we succeeded, Waititu has started fighting me. He is fighting the sacco (Ekeza) but I want to assure him that this country belongs to President Uhuru Kenyatta,” Gakuyo told a rally outside Gakuyo Technical College.

The two, alongside Deputy Governor James Nyoro, were three principals in a coalition dubbed “United for Kiambu” that campaigned for Waititu to the Kiambu county boss.

KIAMBU POLITICS: Its official, its Baba Yao vs Kabogo. Gakuyo and Nyoro unite behind Waititu.

At its peak, Ekeza Sacco had 78,000 members whose savings totaled to over Sh2.5 billion.

The Government, through Commissioner for Cooperative Development Mary Mungai, deregistered Ekeza Sacco after establishing that its officials, led by Gakuyo, were withdrawing huge amounts of members’ savings to fund their personal expenses.

The Thika-based preacher is currently in court as the government seeks to have his assets auctioned to recover the money withdrawn from Ekeza accounts.

I honestly have no sympathy for 53,000 eediats who lost money through Ekeza Sacco and Gakuyo Real Estate.
Heck, even ‘I Stand With Gakuyo’ protests were held. pic.twitter.com/W0J9YCYg4M