Hardly a month after Kenya said it was committed to normalizing relations with Somalia as the “first step” of addressing their differences over the maritime borderline, which is already before the International Court of Justice, the situation has stiffened.

Interestingly, the move comes hours after Somalia Minister and MPs were denied entry at the Jomo Kenyatta International Airport (JKIA) despite holding diplomatic passports. Among that closed Hawala includes TAAJ and AMAL.

Kenya’s diplomatic tiff with Somalia seems to have stiffened after three officials with diplomatic passports were denied entry at the Jomo Kenyatta International Airport on Monday evening. A tweet from Dalsan FM, a leading radio station in Somalia, identified the three as Osman Libah (Deputy Minister of Water and Energy) and Senators Ilyas Ali Hassan and Zamzam Dahir.

“(They) confirmed denied access into Kenya. The three are tonight (Monday) stranded at the JKIA airport Nairobi awaiting to return back to Mogadishu Tuesday morning,” Dalsan FM said.

Liban, the Deputy Energy & Water minister, is said to have traveled to Kenya to attend the launch of the EU Trust Fund for Africa program to be opened at the United Nations office in Nairobi on Tuesday.

The radio station posted a picture of the program showing Foreign Affairs CS Monica Juma among those expected to address delegates on Tuesday afternoon. 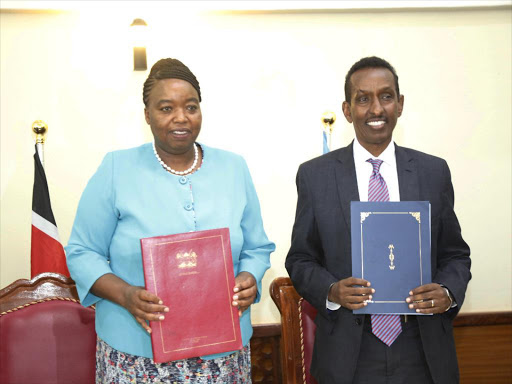 It is alleged that attempts by the Somali embassy in Nairobi to intervene for the three government officials failed.

“One of the Somali ministers, a dual citizen, however, managed to be allowed into the country upon producing a European passport, Dalsan Media learned through a source.

According to the station, the motive behind it is the maritime dispute between Kenya and Somalia.

Though no deal has been struck between the countries following the spat, Somalia still denies claims that it auctioned controversial oil and gas blocks–located in a contested maritime border in the Indian Ocean.

“Somalia is not now offering, nor does it have any plans to offer, any blocks in the disputed maritime area until the parties’ boundary is decided by the ICJ,” a statement from the government said. 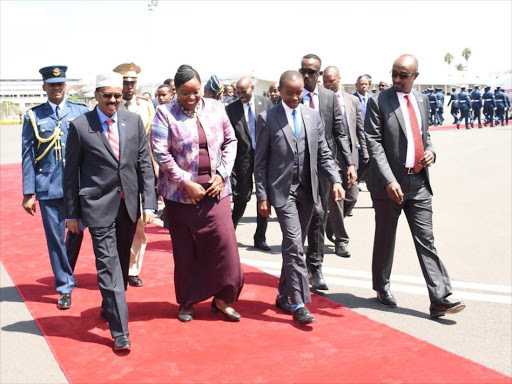 On February 16 this year, the Kenyan Government issued a strongly worded statement in which it declared Somalia an enemy state for reportedly auctioning the blocks. Five days later, President Uhuru Kenyatta chaired a Cabinet meeting to discuss the stalemate.

The Cabinet agreed on a roadmap for resolving the maritime border dispute and measures for safeguarding Kenya’s territorial integrity. The resolution was to safeguard Kenya’s marine resources including offshore oil and gas exploration acreage in the Indian Ocean.