The government has ruled out chances of negotiating with al Shabaab militants in bid to secure the release of two Cuban doctors who were abducted last month in Mandera county.

Foreign Affairs Cabinet secretary Monica Juma said whereas an operation was underway to free the medics, the government would not budge to the demands of terrorists.

“We believe we are going to secure their release but as a matter of policy, this government does not negotiate with terrorists,” the CS said during a meeting with European Union (EU) High Representative for Foreign Affairs and Security Policy Federica Mogherini. 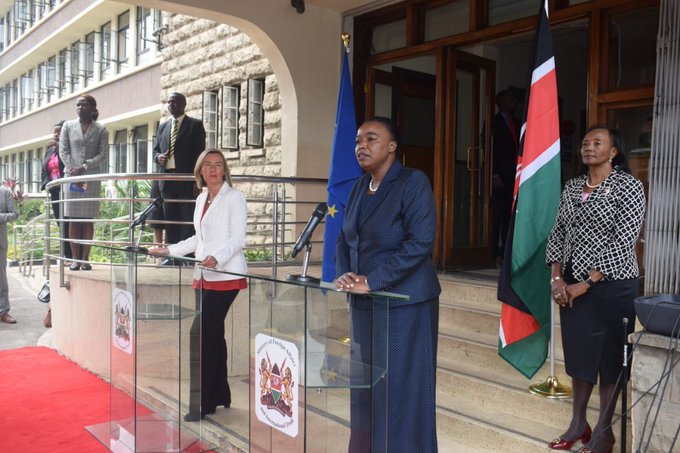 Juma and Mogherini discussed security co-operation, where EU will bolster Kenyan troops’ operation to smoke out Al Shabab in Somalia.

“Kenya has found a valuable partner in the EU in numerous areas, including supporting peace and security in our fragile region,” Juma said.

Mogherini stated that Europe would continue to support Kenya in all social, economic and political spheres.“We see Kenya not just as the gateway to the region or to Africa but also as a development partner,” she said.

The two later launched the cross-border programme at the UN offices in Gigiri, Nairobi.

At the same time, Kenya has intensified lobbying for EU to support its bid for the United Nations Security Council non-permanent seat in 2021/22 period.