Asamoah Gyan will go down in history as the player who put many smiles in the face of Ghanaian. The sensational midfielder will greatly be remembered for lifting Ghana top in the world football ranking.

The most notable incident was the 2010 World Cup when he helped Ghana reach the quarter-finals going down to Uruguay in penalties.

On his part, Gyan, 33, has issued a statement claiming his decision is based on trying to prevent further upheaval ahead of the Africa Cup of Nations in Egypt next month.

The Kayserispor striker has been on the periphery of the Black Stars squad over the past 12 months due to indifferent form and several injuries within his stay in the Turkish Super Lig.

He said: “I also wish to retire from the national team permanently not pretending my presence would not fuel the purported undermining the country as seen under my captaincy,” he said in an official statement.

“I would continue to serve the country Ghana in other endeavors as a businessman through various investments.” 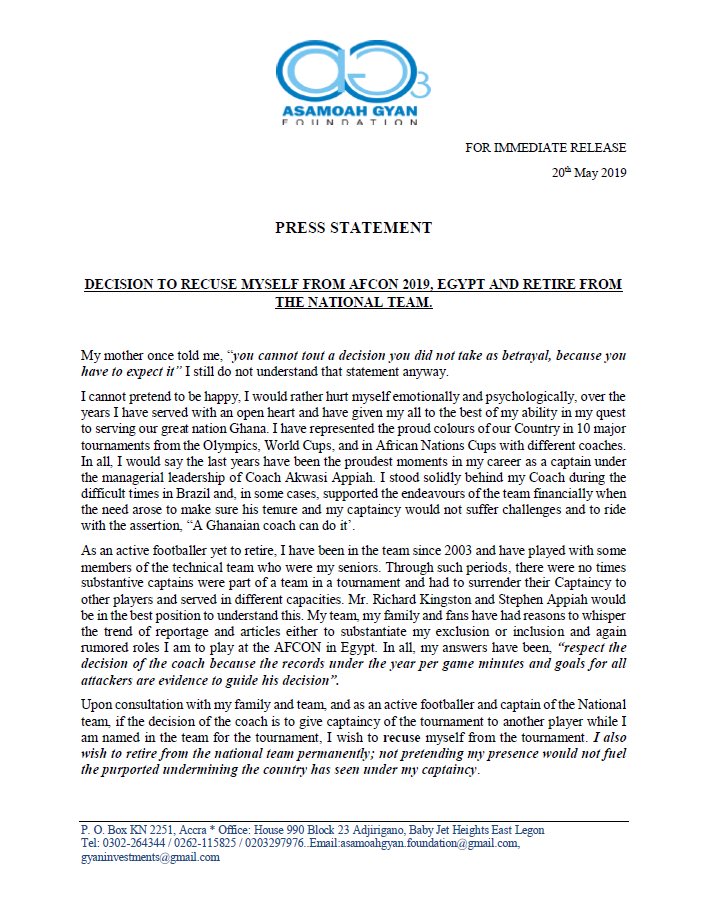 His retirement announcement sparked several reactions from football fans with some lauding his move and others bashing him, terming the move as cowardly.

If Asamoah Gyan has decided to retire why not respect his decision and let him be. After all he has made history in both Ghana and Africa football. 51 goals for Ghana and 1st African player to score 6 goals (highest goals) in world cup in 3 consecutive world cups.

This story of Asamoah Gyan. What's the real story? I don't think you should just quit for losing the captaincy.
Vincent Kompany and Thiago Silva lost captaincy to Hazard and Neymar and they continued playing.

The disrespect is too much we never appreciate what we have Asamoah Gyan is a legend and deserve some respect why make someone the captain whiles he is still in the team at least not all captain start games for their team this is total Disrespect from the coach K.Appiah