Insecurity and continuos killing of Innocent People in Matungu-Sub County, Kakamega County has been a major cause of concern not just for the residents but for the Country as a whole with the Government moving with speed to tame the rogue gangs behind the gruesome murders.

It seems like Interior CS Fred Matiangi’s visit to the area is starting to bear fruits as a number of arrests have already been made.

Malala was arrested at a Kisumu hotel while Murunga was picked up from former Kakamega senator Dr Boni Khalwale’s home in Malinya at a function presided over by Deputy President William Ruto.

Also in custody at Kakamega Police Station is Shibale Ward representative Livinua Oduory, who was picked up from his house early in the morning.

Police intercepted Echesa while he was on his way to attend another meeting in Likuyani where the deputy president was going to commission the construction of a road. Echesa had earlier attended Ruto’s meeting at Khalwale’s home.

Echesa was, however, released after recording a statement. Police said he is scheduled to return to Mumias Police Station Saturday.
Four senior detectives from Kakamega county and a contingent of Administration Police officers from Kisumu pounced on Malala who was attending a workshop.

Malala was in the company of four CECs from Kakamega county, three MCAs and dozens of supporters.

A source from the Kakamega county police headquarters who sought anonymity said that the senator was being investigated over the killings that so far have left over 20 people dead in a span of two months.

The source revealed the arrest was part of the order by Interior Cabinet secretary Fred Matian’gi on Thursday that senior politicians from the region be investigated over the killings.

“After our meeting with the CS yesterday (Thursday), we have commenced thorough investigations and that is why we have taken the bold step,” the source said. 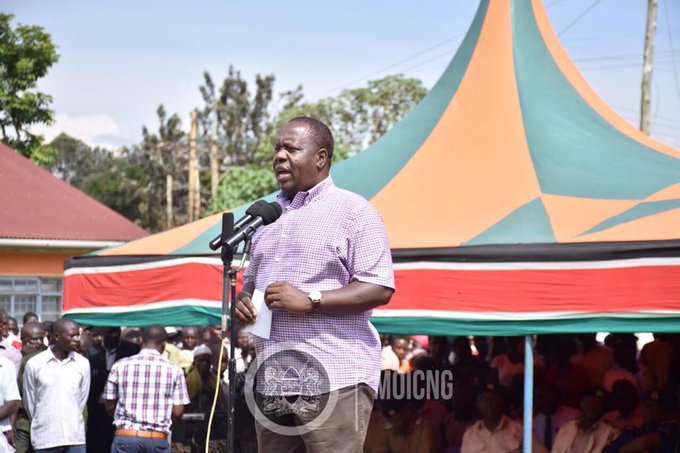 “We have information that some politicians are behind this to gain political mileage. I want to assure you that regardless of your status we will come for you,” Matian’gi said on Thursday during his tour of Matungu.

Drama unfolded at the hotel when the senator confronted the officers accusing them of harassment and accused DP William Ruto of his woes.A bitter argument between the senator and the officers ensued after he resisted arrest before informing his lawyer.

“I am tired of this and I know who is behind this but I am telling you that you will not succeed . I will not bow to the demands of some leaders in this country. I have to inform my lawyer first before I go with you,” he said.

But the officers would not hear his protests and instead pushed him into their vehicle, prompting the senator to threaten to slap one of them. He was later driven to the regional police headquarters for questioning.

The arrests come a day after Matiang’i toured Matungu in Kakamega county and issued tough new measures on security, including deployment of General Service Unit (GSU) officers to beef up security and boost the regular police numbers.

The CS said police were following what he termed “crucial leads” linking local politicians to the killings and that in a few days to come, the suspects would be arrested.

He said some politicians had formed vigilante groups for selfish interests as the groupings tried to out do each other. He, however, also extended an olive branch to the gang members to surrender before they are flushed out.

“We will go to the direction the investigations will take. We don’t care who you are under the political class and your status in society. We will arrest and deal with you as per the law,” he said.