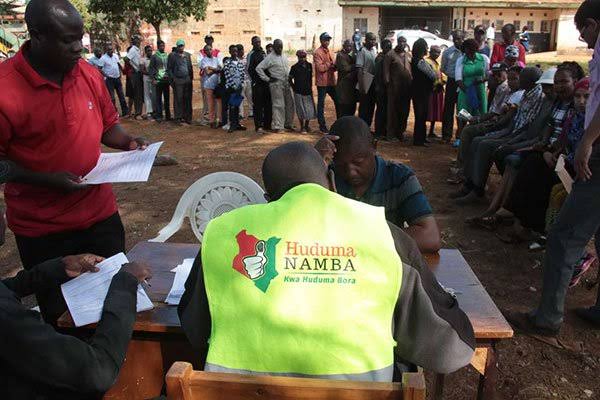 Kenyans can now breath a sigh of relief after President Uhuru Kenyatta heard their cries and extended the Huduma Namba deadline.

The government through Interior CS Fred Matiangi and Newly appointed government spokesperson Cyrus Oguna had maintained that the deadline would not be extended Saturday, 18th May.

Kenyans have been thronging registration centres from as early as 3 AM, hoping to register before the deadline, as the government had through various departments warned that there will be dire consequences for those without Huduma Namba.

Retweet if you registered, or are registering, for the #HudumaNamba to avoid 'future inconveniences' but not for benefits you currently understand or give AF. Tuko wangapi? 🤔

A County Commissioner has said that Kenyans without Huduma Namba will be considered aliens and a threat to National Security while the Communication Authority warned that they would switch off sim cards of Kenyans without the magic number that will ensure access to all government services.

And now Kenyans without the number have been given one more week to register after President Kenyatta extended the mass registration deadline to Saturday, 25th.

State demands farmers repay loans it had written off during the 2017 election campaigns https://t.co/f93jiXH7ug

Former President Daniel Arap Moi, is among the many Kenyans who registered on Friday. Moi was registered at his Kabarnet Moi in the presence of ICT CS Joe Mucheru and his son Gideon.

Some Kenyans have accused the government of defying a court order which had said that registration is not mandatory and nobody should be denied services on the basis of having or not having the number.