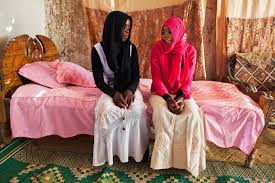 Have you ever wondered why children are being abused in the modern society? This has been a trend in Kenya, whereby girls are the most abused children.

Is it because of love for money? Imagine underage children being forced to marry people they have even never seen! It is sad that some of the parents are the ones behind these plots. This was the situation witnessed in Nairobi’s Eastleigh area. Police are holding two women for allegedly being behind a plan to forcefully marry off a 15-year-old girl a month after she sat her KCPE examinations.

The teen was rescued as she was being readied for a trip to Nakuru when the Citizen TV crew was locked up for close to half an hour.

When the crew arrived on 12th Street, Eastleigh in Nairobi, they embarked on a search for a building where they had been informed that the 15-year-old bride was having her last minute preparations before traveling to Nakuru to meet her new “husband”.

The child bride had recently traveled from Mandera County where she schooled to Nairobi.

She sat her KCPE exams this year scoring 313 marks and even though she was hopeful of proceeding to secondary school, her parents were thinking otherwise.

A husband had been chosen for her in Nakuru and unfortunately, the official wedding, the Nikkah (religious ceremony), had already been done and what was remaining was to start her forced marriage.

“I got an anonymous call of a child who was being forced into marriage, she was not willing to but her parents were insistent,” said Fatma Mohammed a human rights activist.

The child bride was later set free after police from Pangani police station raided the salon and foiled attempts to secretly ship the girl to Nakuru.

Her sisters, who had escorted her, were arrested and taken to the Pangani police station where they recorded statements.

The children’s department is expected to take the child bride to safe custody as police continue their hunt for the groom.