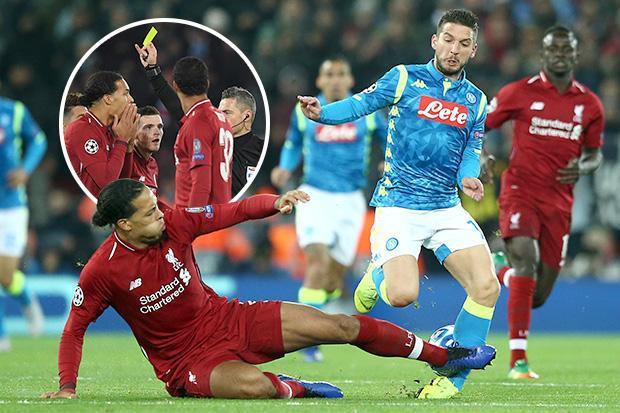 The Referee always has the final say,whether you agree with it or not. Carlo Ancelotti insisted he was proud of his Napoli side after the exited the Champions League with a spirited display which saw them slip to a narrow 1-0 defeat at Liverpool.

A goal from Mohamed Salah was enough to send the Reds through to the knockout stages at Napoli’s expense, but the Italians created plenty of opportunities and were only denied by the brilliance of former Roma keeper Alisson Becker. Jurgen Klopp was clearly in some state of shock at the Brazilian’s heroics.

After the game, a content Ancelotti said: “We have gone very close but we have no regrets. That’s what I said to the players.

That’s how you tackle hard and fair! @VirgilvDijk 👏🏼💪🏼 Into the manure like that Sun 👍🏼 pic.twitter.com/PV4vrYuovd

“I don’t think they should have any regrets. It would have been a wonderful achievement to qualify from a really difficult group and many people didn’t think we would take it this far.

“We lacked luck at times. Hopefully we will get some of that luck in the Europa League.

“We knew Liverpool were going to put us under a lot more pressure. We expected that. They were more aggressive. We knew the intensity would be a lot different to the first game too. It was something we had to cope with.

“You can’t expect to come to a place like Liverpool and create 10 chances. We created two good ones but didn’t have the luck we needed to put them in the back of the net.”

Ancelotti, however, was not happy with the tackle made by Virgil Van Dijk on Dries Mertens in the first half which saw the defender booked, meaning he will miss the first match of the knockout phase in February.

“From the video it is a red card. There are a lot of questions about VAR but when VAR comes in the Champions League it will be too late,” he added.