With three years away, the 2022 succession politics are hitting momentum with various leaders campaigning for each others and themselves as well.

However Raila Odinga and President Kenyatta have not been left behind after all they are also politicians.But in the meantime the two leaders have been asked to keep off the 2022 politics.

This came after a section of leaders from the Western Kenya region asked want both President and opposition leader Raila Odinga to keep off the approaching 2022 presidential contest.

While speaking during a fundraiser at ACK Mulwanda in Khuisero Kakamega county on Sunday, the group that was led by nominated MP Godffrey Osostsi proposed a new strategy for the elections.

He was accompanied by Baringo Senator Gideon Moi who was on the last day of his 2-day tour of the region, Osotsi proposed a union pitting Moi and Amani National Congress (ANC) leader Musalia Mudavadi.

He further said that Senator Moi has high chances of winning the presidential race without any sweat come 2022.

In addition he said, “Mr Moi has been accepted in the region and as the Mulembe nation, we have endorsed our son (Mudavadi) to work with him. We have already designed the winning strategy and urge other leaders from the region to support this new development.” 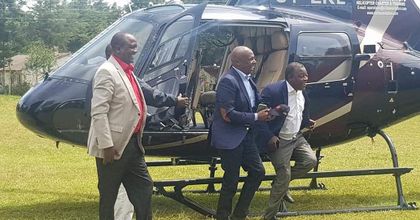 Moi who is expected to join the race with the sole aim of locking out fellow Rift Valley top leader and Deputy President William Ruto is, however, yet to officially disclose his plans for the race.

The leaders, however, did not disclose who they propose to fly the union’s flag and who will be his running mate.

Osostsi called upon Raila and Uhuru to help realize the dream by endorsing the team and using their influence as kingmakers ahead of the elections.

“The region has over 5.7 million votes and when we add those from Rift Valley and Eastern region, our team will have formed the next government. We want Raila and Uhuru to marshal their people in favour of our candidates come 2022,’’ he was further quoted.

But when he took the podium, Moi called for political calm, urging leaders to patiently wait for 2022.