2017 Gen Elections mess boils down to one word. CORRUPTION!

Independent Electoral and Boundary Commission chairman Wafula Chebukati has appeared before the National Assembly Public Accounts Committee.
While adressing the comitee chaired by , Wafula said that when More than 100 contracts were issued by the secretariat from June 2016 to the election time ,the Commission (IEBC) members had no clue to the process.

A revelation that left the Public Accounts Committee shocked.

Among the questionable contracts that were awarded through direct tendering — contrary to the Public Procurement and Asset Disposal Act — include the Sh453 million given to IBM East Africa for the maintenance of servers that hosted the biometric voter register. 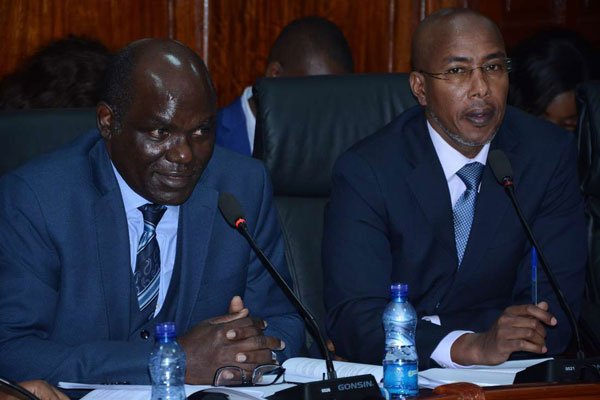 He revealed how the secretariat violated the law and awarded lucrative tenders without following the law to “some shady companies” with over Sh9 billion unaccounted for, according to the latest report of Auditor-General Edward Ouko.

Mr Chebukati was put to task over what the commissioners did to save the country from losing money.

PAC chairman Opiyo Wandayi (Ugunja) posed: “So this commission was just there…if nothing was brought to it, it did nothing! Did the commission know that something of the sort was happening?”

He said the committee will do a special report on the commission aside from the other government agencies. “This is a clear case of abuse of the law,” Mr Opiyo added.

Another is the Sh273 million tender to Oracle Technology Systems Kenya for supply and provision of database and security solution, which was awarded within a record three days.

Some Sh28 million was also paid to Telkom Kenya for the procurement of co-location services for data centre and disaster recovery.

But Mr Chebukati said whenever the commissioners tried, they would be met with resistance from the secretariat headed by the sacked chief executive, Mr Ezra Chiloba.

That IEBC Finance Director & PA to suspended CEO Ezra Chiloba were caught stealing 14 Files from IEBC isn’t shocking . What will shock is if the two plus whoever sent them to steal haven’t been arrested. Corruption wil stop when Impunity is ended forcefully by Public Shooting.

“There was no matter that was brought to our attention that we didn’t attend to,” Mr Chebukati told the committee.

“The sacking of the CEO (Mr Chiloba) is part of the effort to clean the commission and we invite other government agencies to come and help us.” “They resigned in protest because we were digging deeper into the matter and the decision to discipline the CEO,” Mr Chebukati said.

Meanwhile, the committee has ordered the commissioners who resigned, former head of legal services Ms Praxedes Tororey, the management of Oracle, IBM East Africa and Telkom Kenya to appear before it next week.