Murathe hosted Mudavadi for more than seven hours at his rural home in Gatanga.

The two attended the burial of renown businessman Muchai Githu in Shomo village, Gatanga constituency, before retreating to Murathe’s home around 5pm.

Mudavadi is reported to have left Murathe’s house after midnight, sparking intense speculation on the mission and substance of their meeting.

Also in the meeting described as “a men-only club” were a few businessmen and influential political operatives who had been invited by Murathe. They included Capt Kungu Muigai, Uhuru’s cousin and de facto spokesman of the Kenyatta family.

The meeting comes barely two weeks after President Kenyatta told a gathering of Nyeri leaders that he will shock them with his preference for successor. His statement, made against the backdrop of divided opinion in central Kenya over his successor within the Kikuyu community and support for the 2022 Presidential election sent tongues wagging. Some have interpreted it to mean Deputy President William Ruto is not guaranteed of his — and by extension the central Kenya — backing while others say it was directed at pouring cold water on the premature 2022 election campaigns.

Kungu is known to be in the President’s inner circle and is patron of the National Council of Elders and inter-community networking group.

Yesterday, Murathe played down the meeting and said people should not read too much into it. He told the Star that Mudavadi had shown up for the funeral and he decided to host him since former area MP Peter Kenneth and sitting MP had left for Kitale.

“I was then left with these foreigners who have visited our village and I slaughtered for them as a good host. In fact, I was in China and I brought my trip back by one day to make it for the funeral,” Murathe said.

He added: “I drove from the airport straight to Gatanga. I had no clue that he (Mudavadi) was coming but it is true we spent a lot of time together. You know I went to school with him. Do not read anything into it.”

The funeral service was attended by among others Kenneth, Gatanga MP Nduati Ngugi and Kieni MP Kanini Kega. 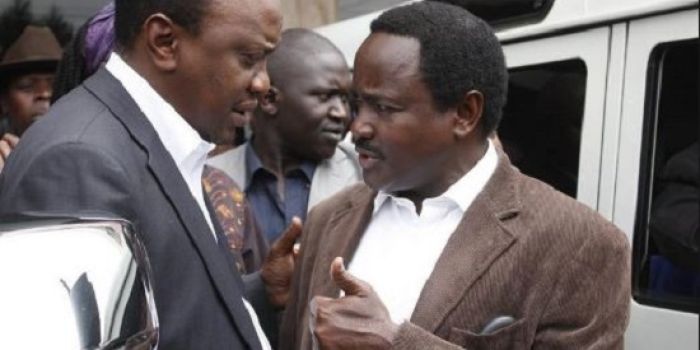 The meeting came a week after the Star exclusively reported that the ANC leader was shopping for a running mate from central Kenya in his bid to succeed Kenyatta who is constitutionally ineligible to run again.

Murathe is no ordinary central Kenya politician. He is Uhuru’s close ally and confidant, having played a major role in his presidential campaigns in 2013 and 2017.

He was at the forefront in the formation of TNA party and later transforming the Jubilee Coalition into Jubilee Alliance Party, the precursor to the current Jubilee Party.

Murathe is also well known to Mudavadi since their days at St Mary’s School, which President Kenyatta also attended.

Murathe has in the past openly differed with Ruto’s allies who have accused him and others around the President of trying to undermine the DP’s bid. But the former Gatanga MP has dismissed those claims, telling the Star in a past interview that it was in the interest of Ruto for Jubilee to stay intact and his allies should not cause a split.

Since his re-election, Uhuru has avoided making any direct endorsement of Ruto’s presidential bid despite their Jubilee pact.

His November 3 declaration that his choice in the 2022 succession politics would be a shocker to many was the closest he had come to commenting on the controversy.

The remarks surprised MPs who have been aggressively marketing Ruto’s presidential bid in the populous region despite the President’s repeated cease-and-desist warnings against 2022 politicking. They saw it as the clearest indication that Uhuru may renege on his pre-election promise to back Ruto for the country’s top job.