Graffiti is a serious crime that impacts all members or society. The more visible the tag, or the more dangerous the place is, the more “fame value” there is in it.Key towns known in known to have crime levels like Dandora , kayole , Githurai are known to be earliest towns to have adopted graffiti and mataus with loud music , the famous “paradiso”.

You are basic upstairs if you can’t connect the dots between Matatu madness and the graffits on the mats. Look at how drivers and tauts who operate vehicles with graffiti compared to their fellows who operate normal matatus and learn.

Matatus (Public transport buses/vans) are iconic on the busy streets of Nairobi. Graffiti artists try to make each matatu louder than the next with custom designs covered in flashy colors, and state of the art entertainment. The more glitzy and effervescent the matatu, the more prominent it becomes to attract passengers.

Graffiti is often the first sign that gangs are taking over a neighborhood. Gangs use graffiti as their street “telegraph,” matatus sending messages about turf and advertising their exploits. Graffiti identifies territorial boundaries, lists members, and communicates threats to rival gangs.

#MichukiRulesMatatu Graffiti and Matatu body modification should just remain?? This is a way of showing creativity and creating sources of employment to many youths in the country. So I don’t see how Graffiti/Art causes ROAD ACCIDENTS! RT Country wide ?#SaveOurMatatuCulture pic.twitter.com/Y8MzNgvPVt

This translates why certain matatus have specific/certain touts who term themselves superior over the others and who use the advantage to lure women with their status.

Communities can adopt a zero tolerance policy for vandalism. The first step is to identify locations or objects prone to graffiti and to teach property owners effective removal methods. Participants should include property owners victimized by graffiti, schools, government, businesses, recreation facilities, public transportation, utilities, public works, and shopping malls among others.

A community’s first step in taking back its streets is getting rid of graffiti immediately. This power struggle cannot be won overnight, but persistent communities working in partnership with law enforcement almost always emerge as victors.

The dislike for matatu art is worsened when people align it with graffiti. This association negatively effects people’s opinions on matatu art because graffiti is often seen as illegal writing ,vandalism, rowdy touts and crime. However, there are major differences between the two practices that make the illegality arguments irrelevant. In contrast to graffiti, which destroys a space, the purpose of matatu art is to reinvent and reconstruct a space.

Inspector General of Police Joseph Boinnet had given matatu operators have until Monday to remove the graffiti on their vehicles ahead of the major crackdown. 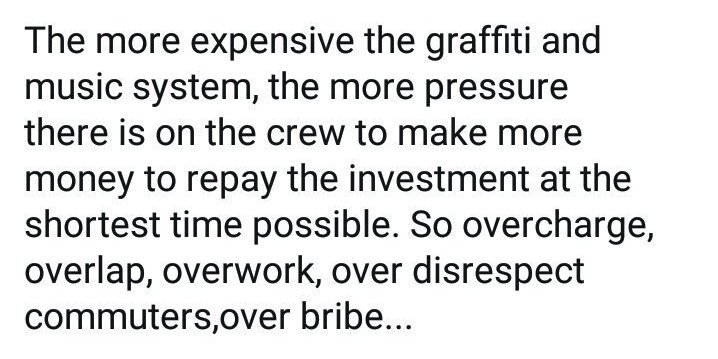 This matatu killed 7 people including my cousin. The driver was Recklessly driving. He was charged and released later ..Let’s do away with graffiti. Those in this business can look for something else to do. pic.twitter.com/EoZZ7ZGAS5

Absurd that with all the hot mess that the matatu industry is in from overspeeding, unroadworthy vehicles to some being driven by drunk drivers, rowdy conductors and everything. The media and police really wants us to focus on non issues like graffiti. Someone’s paying the piper.

The purpose of matatu graffiti is to glorify the matatu and its riders. Matatu graffiti is meant to create a sense of intimidation and may increase the sense of fear within a certain route. Graffiti is used to communicate messages between matatus using codes with common meaning.

Of greater concern is the inherent violence associated with Matatu graffiti. When a matatu is marked with graffiti, the entire route and its riders become targets for violence. Anyone in the matatu or in that route is fair game for drive-by attacks by touts.

The more the graffiti the more demanding the matatu boss is, and hence the recklessness to reach targets. Down with graffiti, iende kabisa.

This explains why matatu touts will rough you up and nobody will question or come to your help, otherwise you will end up a victim of a bruised face with spanners.

Consequently, innocent passengers are often subjected to matatu violence by the mere presence of graffiti in the matatu.