The Council of Governors in a meeting on Thursday agreed to support the calls for a new referendum but only if certain conditions are addressed.

In a tweet, the Council’s outgoing Chairman Josphat Nanok stated that the Governors will support the referendum if it increases allocations to counties.

“The CoG support calls for a referendum but only if it seeks to increase allocations to counties and is driven by ‘Wanjiku’ (citizens). We will undertake an internal audit on the implementation of devolution so far which will inform referendum question for Counties,” read the tweet.

He explained that the slow disbursement of county funds is the main reason why most development projects are taking longer to complete.

“Slow disbursement of funds has hampered implementation of development projects to an extent that despite being halfway through the financial year, three-quarters of counties are yet to receive their allocations,” stated Nanok.

The Governors formed a committee and mandated it to consult county assemblies forums in order to have one County Governments’ voice. 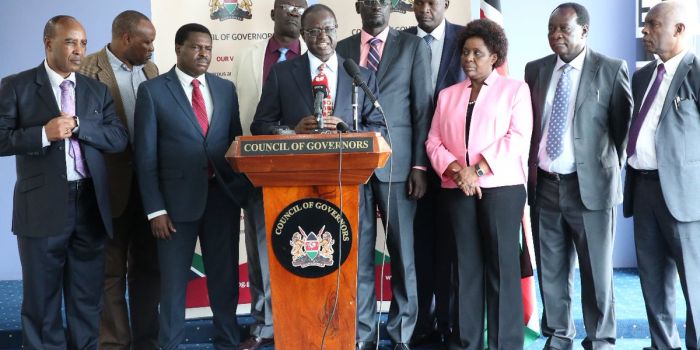 The committee will be co-chaired by Makueni Governor Kivutha Kibwana and his Meru counterpart Kiraitu Murungi and will have nine other members among them Anyang’ Nyongo (Kisumu County), Joyce Laboso(Bomet County) and Charity Ngilu (Kitui County).

Nanok also clarified that, based on a meeting that took place on October 8 this year, counties “are 100% owners of the water services providers”.