Raila Odinga’s elevation — and should he exit from local politics — will leave a vacuum that will need to be filled over time. Among the possible candidates to fit his opposition shoes will be some of his allies and rivals within the Nasa family of parties. They include 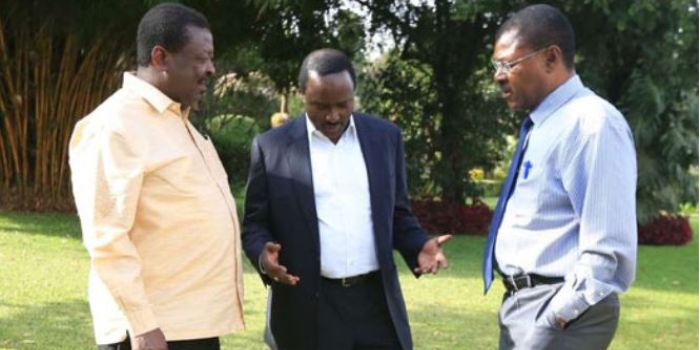 The Wiper party leader and NASA co-principal was Raila Odinga’s running-mate in both the 2013 and the 2017 general elections. He served as the tenth Vice-President of Kenya from 2008 to 2013. Musyoka served President Daniel arap Moi’s administration in various capacities, rising to Minister for Foreign Affairs from 1993 until 1998. Subsequently, under President Mwai Kibaki he was Minister of Foreign Affairs again from 2003 to 2004, then Minister of the Environment from 2004 to 2005.He was an unsuccessful candidate in the 2007 presidential election after which he was appointed as Vice-President by Kibaki in January 2008. Kalonxzo has recently cemented his ties with Raila, after initial discord over his unilateral swearing-in as the people’s president and dissenting from his handshake with President Uhuru Kenyatta.

He is the founder and co-principal of the NASA coalition. He served as the seventh Vice President of Kenya in 2002 for a short term and Deputy Prime Minister from 2008- 2012 under the Grand Coalition government after their unsuccessful Raila-Musalia ODM ticket for the presidency at the 2007 general election. The current Party Leader of Amani National Congress had in 2012 decamped from the Orange Democratic Movement (ODM) where he served as the deputy party leader to contest for the presidency on the UDF party in 2013, coming third. Last year, he was the chief agent and campaigner for the NASA presidential candidate, Raila Odinga. Initially seen as his preferred political heir, Musalia has recently been eclipsed from Raila’s side because of his lethargic response to political changes and ambivalence over the handshake with Uhuru.

The Ford Kenya party leader and estranged NASA co-principal served in the Grand Coalition government as Minister for Foreign Affairs from 2008 to 2010 and from 2011 to 2012. He was also Minister for Trade from 2012 to 2013. Wetang’ula represented Sirisia constituency in the National Assembly from February 2003 until January 2013. He was elected Bungoma senator in 2013 and became Minority leader in the Senate. However, he was stripped of his position and has been trying to forge a merger with Musalia Mudavadi’s ANC while at the same time reaching out to Deputy President William Ruto. His virulent criticism of Raila’s swearing-in which led to his ejection from the Minority leadership of the Senate, compounded by his warming to Ruto has alienated him from the Nasa leader’s constituency.