The slain Rongo University Student Sharon Otieno was on Friday buried in her paternal ancestral land in Homa Bay.

In accordance with Luo traditions, Ms Otieno’s body was brought home for an overnight stay on Thursday before its burial on Friday at her grandfather’s homestead, next to the grave where her foetus was buried.

The family said that it gave Bernard Owuor, the husband to the late Sharon from Migori county 44 days to bury her, but he did not show up.

Luo traditions dictate that a married woman be buried at her husband’s home, irrespective of where one dies. In the case of Sharon, the body would have been buried at Owuor’s home. 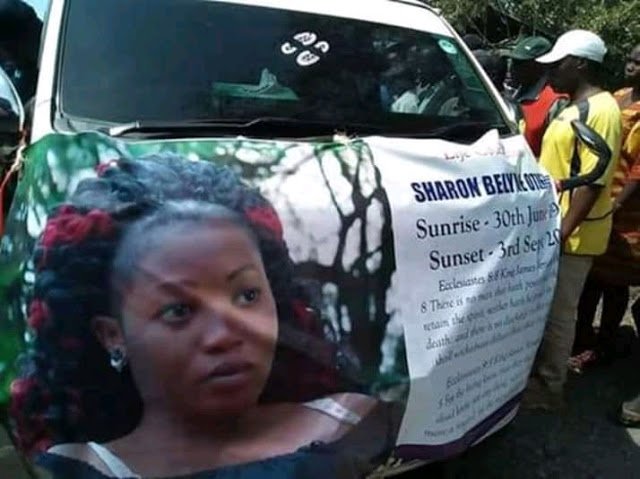 Sharon’s family on Thursday said they decided to bury her at her grandfather Samuel Odege’s home in Magare because Owuor “failed to communicate”.

Olweya said they decided to bury Sharon  in Odege’s homestead because a grandfather is considered an equivalent of a granddaughter’s husband. He said they waited long enough for Sharon’s husband to appear, but he did not.

Olweya said they stopped waiting for Owuor on Wednesday and decided to prepare the grave site. “We’re burying Sharon here because her husband failed to communicate to us. We assume she had not been married,” Olweya told journalists yesterday.

Sharon’s unborn baby was also buried in the same homestead. More than 2,000 mourners attended the burial as the event kept off politics Sharon’s funeral.