New is great. New sounds like potential and opportunity…unless I think about it too much. Then it sounds like change and the unknown. As this new year begins, I’ve promised myself that instead of fearing the unknown I will choose to hope in the known. So what is known about new? What do I know to be true that I can securely place my hope in? I know this — that God is the author of new. And since he authors every good and perfect thing, I can trust that this new year will bring good with it (James 1:17).

New is one of God’s promises to us, and we know that all of his promises are fulfilled in Jesus Christ (2 Corinthians 1:20). As believers, our hope ultimately rests in the promise that Christ will come back for us one day and make all things new (Revelation 21:5). But what about the here and now? What can I hang my hope-hat on today, tomorrow, and every other day of this new year? Luckily, Scripture is full of stories that show us how God makes things new for his glory and for the good of his people. Let’s look at just a few of them and at the hope they bring. 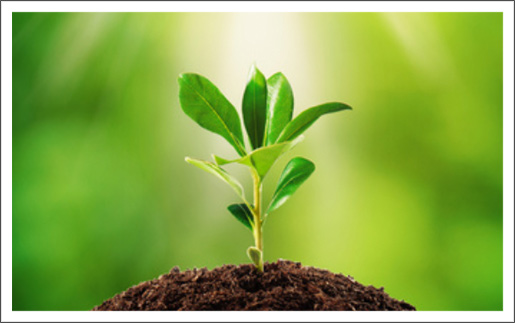 I love God most for his ability to restore. He restores us to a right relationship with him through the gift of forgiveness and justification. He is able to restore earthly relationships. And he can even restore days and years that have been lost to the effects of sin (Joel 2:25). That has to be greatest evidence of the extravagant nature of God’s mercy. Not only can he renew a life and redeem its future, but he can also redeem its past.

In Scripture, we see God’s power of restoration countless times. When Jacob was finally reunited with his lost son, Joseph, he described the grief-filled days of his life as “few and evil” (Genesis 47:9). But in his last days, through God’s mercy, Jacob was able to look back on his life and see that God had been his shepherd all along and that he had been redeemed from the evil that once marked his life (Genesis 48:15-16). In the story of Ruth, we see God take a family whose name faced extinction and not only restore to them a secure future but knit them into his grand story of redemption by placing them in Jesus’ family line.

In the New Testament, we see Jesus live a ministry of restoration. He restores sight to the blind, the ability to walk to the crippled, hearing to the deaf, and new clean skin to the diseased (Mark 8:22-26; Matthew 9:2-8; Mark 7: 31-37; Luke 5:12-25). In all of these accounts, Jesus didn’t just heal a condition. He restored life, security, and hope to broken people.

What has God restored to you? Time? Relationships? What are hoping in Christ for in the new year?

Names carried a lot of significance in Scripture. Throughout the Bible, people are introduced to us by name and by the meaning of their name. Eve was “the mother of all the living,” Isaac was “laughter,” and Samuel was “asked of God” (Genesis 3:20, 21:6; 1 Samuel 1:20).

What’s even more significant is the renaming of people in Scripture. When God gave someone a new name, it was always a sign of renewed purpose and a redeemed life. God changed Abram’s name to Abraham to signify his promise to make him the father of many (Genesis 17:5). He changed the names of Hosea’s children from No Mercy and Not My People to My Loved One and My People to symbolize his love for Israel and his plan to redeem her from idolatry (Hosea 1-2). Simon became Peter, and Saul became Paul when they became Jesus’ disciples (Matthew 4:18; Acts 13:9). They received new identities in Christ as they forsook life in the flesh.

While we may not actually receive new names when we become Christ-followers, we certainly receive new identities. My name, Caitlin, happens to be a great reminder of this to me. It’s a Gaelic name that means “pure.” The irony is that my sins make me anything but pure. But because of Christ’s sacrifice, I am washed white like snow, pure and clean. I get to wake up and put on Christ’s righteousness every day as if it’s my own.

So as I look at the new year ahead, I can trust and hope in my identity in Christ. I know that, no matter how I fail, God’s mercies are new every morning (Lamentations 3: 22-23). He has made me worthy of my name and called me his in Christ.

If you are in Christ, you have been given a new name, a new identity. Are you living according to your new name with renewed purpose and redemption? God makes dead things alive again. Literally. He has power over death in every sense, and he demonstrated that to us when he raised Jesus from the grave. Scripture says that, as believers, we have that same power dwelling in us. It’s what gives life to our dead souls (Romans 8:11).

I can get so easily discouraged when I think about all the times I’ve failed and given in to temptation…just in the last week. And it makes the idea of fighting this battle for another year of life seem overwhelming. But this truth, that I have the same power that raised Christ from the grave dwelling in me, gives me great hope. If I lay down my weak, flawed existence every day, I can trust that God will resurrect it with new life and new grace.

Do you trust in God’s power to resurrect? Are you living in the truth that God can bring new life to your soul each day? Or are you living as one defeated by sin and shame?

All Things New
As I begin this new year, I’m committing to hope in God’s power to make things new. He restores lost time, bestows new identities, and creates new life. He offers renewed mercy to his own with each day. He promises good plans for his people, plans that include a hopeful future (Jeremiah 29:11).

So rather than seeing the start of another year as a daunting task to be met or an unknown to be feared, my prayer is that I can trust in God’s sovereignty over new. There will be new blessings, new trials, new failures, and new victories, but his goodness will guard them all.