On Friday, the 150 or so protesters who marched through downtown Johannesburg demanded the deportation of all undocumented foreigners in South Africa by the end of the year.

Their demonstration followed a new outburst of deadly xenophobic violence in the Soweto area of Johannesburg. Police say 27 people were arrested, and two face murder charges. 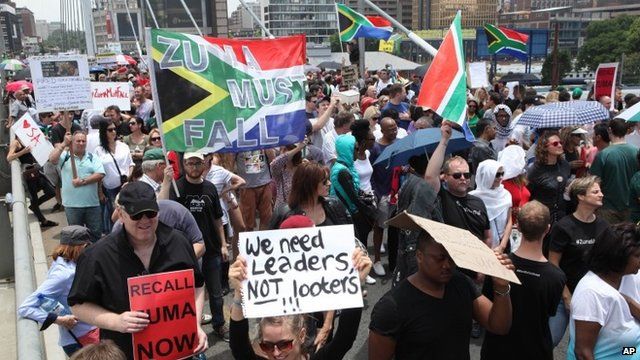 Xenophobic attacks have surged in South Africa in the past week, with at least four foreigners killed in clashes with angry locals who accused them of taking scarce jobs.

Friday’s march was led by Thembelani Ngubane, the founder of the new party, known as the African Basic Movement. He says the party’s views on foreign nationals are central to its platform.

Some 2 million foreign nationals live in South Africa, according to the most recent census.

Ngubane’s group believes that foreign nationals take jobs and bring crime into the country. However, researchers have found that immigrants are often job creators, and are not disproportionately responsible for violent crime.

Sharon Ekambaram, who leads the refugee and migrant rights program for legal advocacy group Lawyers for Human Rights, says her group is filing a legal complaint against the party. She says the party is spreading hate speech, which is against the law in South Africa.

“It is dangerous; it is not only dangerous to foreign nationals, our brothers and sisters coming from our neighboring countries, predominantly black African brothers and sisters, but it is also dangerous for South Africans and poor communities, and I think that we, that law enforcement agencies, need to be much more visible,” she told VOA. “We call on the police to ensure that they take action; this is unlawful.”

Both of South Africa’s main political parties, the ruling African National Congress and the opposition Democratic Alliance, have condemned the recent violence and say xenophobia has no place in the Rainbow Nation.

But as the angry protesters marched through the streets of Johannesburg, Malawian national Tasira Banda, working at a local nail salon, spoke about the protesters, and about South Africans in general.

“You see, they are saying, ‘Foreigners, we are stealing their jobs,’” she said. “Well, they can’t do what I’m doing, you see? They will say, ‘Foreigners, they are taking our wives.’ They can’t support their wives. All they do is drink beer, or go and steal, that’s it.”

She turned back to her work.