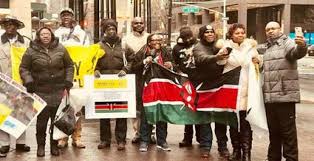 Kenyan immigrants working in the US have been ranked as the third most industrious foreigners.

Kenyan workers scored 73.4 per cent to emerge third in the list of the hardest and most skilled immigrant groups in the US, according a 2018 report by Bloomberg.

The research ranks Ghanaians and Bulgarians at positions one and two, with 75.2 per cent and 74.2 per cent, respectively.

Other African countries that feature in the report’s top 10 are Ethiopia (4th), Egypt (5th), Nigeria (8th) and Liberia (9th).

This makes Africans in general the most productive immigrants in the US ahead of those from Mexico and Central America, who constitute more than 70 per cent of foreign nationals in that country.

“If we want more highly skilled and hardworking English-speaking immigrant obviously the place to go for them is Africa,” Bloomberg journalist Justin Fox, who came up with the report, said.

The report, developed from the 2016 US Census Bureau American Community Survey, also indicates that Kenya is among the African countries with the highest number of immigrants studying and working in the US.

According to the report, Kenya, Ghana, Nigeria and Nepal have the highest number of citizens pursuing higher education in the US after Saudi Arabia.

The report put the number of Kenyans who legally live and work in the US at 120,000.`

The Bloomberg report came three months after a survey by the Central Bank of Kenya indicated that Kenyans living and working abroad remitted a record Sh64.5 billion between January and March 2018.

This is almost a 50-per-cent rise from the Sh43.4 that the diaspora community brought home in the same period in 2017.

But ironically, the report comes on the backdrop of President Donald Trump administration’s continued crackdown on illegal immigrants, including Kenyans.

Last year more than 100 Kenyans were deported from US—  a sharp increase since Trump assumed power on January 20, 2017.

The rise— from 63 in 2016 to 103 last year— reflects an overall increase in deportation of Africans.

A relative of Devolution Cabinet Secretary Eugene Wamalwa is one of the Kenyans who was to be deported from the US in April after his appeal for political asylum was denied.

Dr Mzenga Aggrey Wanyama, who has been teaching at Augsburg University in Minneapolis, Minnesota, and his wife Mary Namalwa Mzenga, had attracted huge support as they faced deportation from a country they have lived in for 25 years.

“Well, what can I do? If they want me to buy my own ticket, I will do that,” he told the Minneapolis-based StarTribune newspaper in March this year.

Dr Wanyama told the publication that he had resigned to the deportation as ordered by the Trump administration.

His expulsion was later suspended by authorities after he lodged an appeal.

Dr Wanyama first entered the US in 1992 as a non-immigrant exchange visitor.