Freddie Ljungberg has been appointed as the coach of Arsenal’s under-23s side.

The Arsenal legend made his return to the Emirates Stadium on Monday night, 11 years after his appearance with the Gunners. The Swedish made 325 appearances for the club between 1998 and 2007, netting 72 goals and winning two Premier League titles. 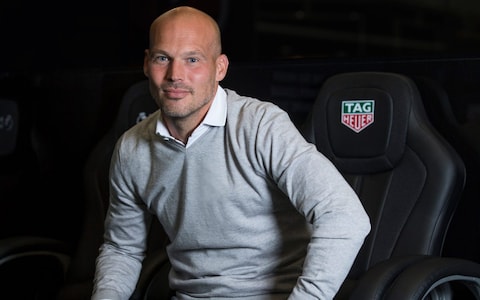 He rejoined the club in June as part of new boss Unai Emery’s restructuring of the backroom staff, and on Monday night led the club’s under-23s side against Brighton where they drew 1-1.

The winger was part of the 2003-2004 Invincibles side, finding the net four times in 30 Premier League games. He left the club in 2007, joining London rivals West Ham for a one-year spell at Upton Park. He began his career at Halmstad and went on to spend most of his career at Arsenal, where he won honours including two Premier League titles and three FA Cups, scoring in two finals including the victory in 2002. After leaving Arsenal in 2007, he had short spells at a number of clubs in England, Scotland, the United States, Japan and India.

An international for a full decade, Ljungberg earned 75 caps and was captain of the Swedish national team until he announced his international retirement after UEFA Euro 2008.

Ljungberg was a model for Calvin Klein underwear until 2007.  He previously represented brands such as Nike, Procter & Gamble, L’Oreal, Puma, Beats, ESPN and Pepsi.

Ljungberg was signed by Arsenal in 1998 for £3 million. Arsenal scouts watched him for over a year and Arsenal’s manager, Arsène Wenger, took the unusual step of authorising the signing after watching Ljungberg play for Sweden in their victory against England on television, without seeing him play live. Seeing Ljungberg’s performance against England only confirmed to Wenger that Ljungberg could cope against English opponents, and he was signed shortly after. Ljungberg proved himself without difficulty and scored on his debut on 20 September after coming on as a substitute against rival club Manchester United, the match ending 3–0.

Some of Ljungberg’s best form came in the second half of the 2001–02 season, when Arsenal won their second Premier League and FA Cupdouble. Following a knee injury to Robert Pirès, Ljungberg scored in most of Arsenal’s remaining games, including a stunning finish for Arsenal’s second goal in the 2–0 FA Cup Final win over Chelsea. Ljungberg had scored many important and vital goals for Arsenal throughout the season. He scored an equaliser against Manchester United, in a game where Arsenal went on to win 3–1.

He was instrumental in Arsenal’s 2–1 win against Liverpool at Anfield where he won a penalty which Thierry Henry scored and then he slotted in a sweet finish from a Robert Pirès cross. He scored a nearly identical goal again against Liverpool at Highbury three weeks later, where the matched ended up being a 1–1 draw. Ljungberg ended the 2001–02 season scoring 17 goals in all competitions.

Ljungberg was the first player to score a goal at an FA Cup final outside England, when Arsenal lost against Liverpool in 2001 at the Millennium Stadium in Cardiff. A year later, against Chelsea, he became the first player in 40 years to score in consecutive FA Cup Finals.  He also scored a penalty in the shootout in Arsenal’s 2005 FA Cup Final victory over Manchester United.

He was most comfortable on either wing in midfield, though he could play centrally in a 4–5–1 formation or as a second striker. Ljungberg became a regular in Arsenal’s starting lineup following the departure of Emmanuel Petit and Marc Overmars in the summer of 2000. For several seasons he played a major role for the club including being a member of the unbeaten 49 game run for Arsenal. He had to fight with constant injury problems and occasionally severe bouts with migraines; in 2005 a persistent hip injury led to fears he may have contracted cancer, which were unfounded. It transpired that he was suffering from blood poisoning caused by his large tattoos.

Despite a persistent ankle injury, Ljungberg played for Arsenal in the 2–1 defeat by Barcelona in the Champions League Final in Paris on 17 May 2006.

It was speculated in January 2007 that Ljungberg was being forced to leave Arsenal, after bosses became tired of a run of injuries restricting his play. “Ljungberg still has a lot to offer to Arsenal,” Arsène Wenger said, on 13 January 2007, at a Blackburn Rovers pre-match press conference, stressing the fact that Ljungberg will stay at Arsenal until the end of his contract in 2009.

Ljungberg came back after a long injury in an FA Cup match against Bolton Wanderers, scoring a goal thirteen minutes before the end of extra time, earning Arsenal a place in the fifth-round tie of the FA Cup against Blackburn Rovers.