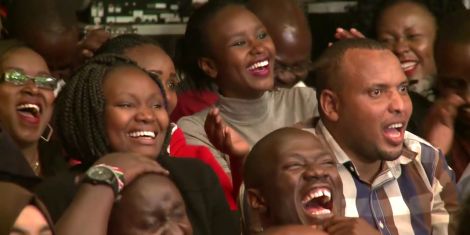 A Kenyan lady was roasted online after going on national television to demand for a man who can finance her extravagant lifestyle.

Appearing on ‘Hello Mr Right’ match-making TV show on Startimes, the young lady who was searching for love revealed that she is not only looking for a man, but one to spoil her to her every whim.

The statement she used surprised not only the hosts of the show Dr Ofweneke and Shix Kapienga but also other participants and audience present.

“How much do you want your boyfriend to send you in a day?” Ofweneke asked.

“I want a man who can send me fifty thousand every day,” said the lady.

The man she was directing the comments at was so furious that he proclaimed he would never spend even fifty shillings on her. Another contestant was perplexed wondering how she thought a man would give her that much money every day.

Kenyans online were angry after the lady’s outrageous comments. One was so frustrated with her approach to love that he claimed that she is in need of help, not love. Another irate fan added, “How to stay single in one easy step😂”

Check out the hilarious video below:

Check out some more reactions below:

Sweetie get a damn job 😏