The embattled Nandi Governor Stephen Sang is unshaken despite spending a night behind bars following his act of ‘bravery.’

The residents of Nandi County have stood with the Governor Sang who was today charged with malicious damage of property.

Sang was arrested on Monday by detectives moments after his defiant address outside the county headquarters in Kapsabet town.

The police were forced to lob teargas canisters at Sang’s supporters as they drove him to Kisumu under heavy security. He was later detained at Kisumu Central Police Station.

His return in Nandi County was greated with a grand reception.

Large masses of people showed up to welcome Governor Sang.

Governor Sang in his speech promised to continue fighting for the rights of Nandi County no matter the consequences.

“I will not relent in fighting for the rights of the people,” Stated Governor Sang.

For the malicious damage to property charge, Sang is accused of destroying tea bushes on Kibware Tea Estate on June 8. 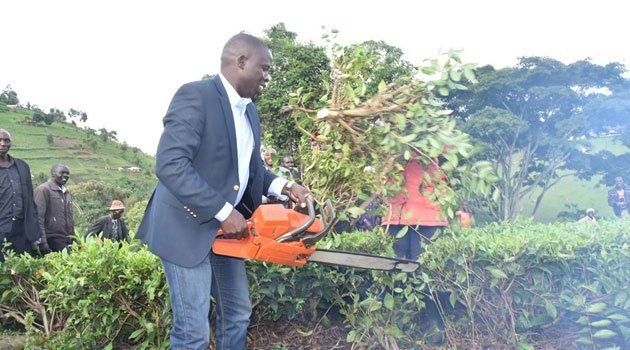 For the incitement charge, Sang is accused of saying, “You members of the public arm yourselves and deal with anyone who interferes or enters repossessed land which was earlier grabbed by Kibware Tea Farm.”

He is accused of uttering the statement on June 8 on Kibware Farm.

For abuse of office, Sang is accused of using two county tractors to destroy tea bushes.