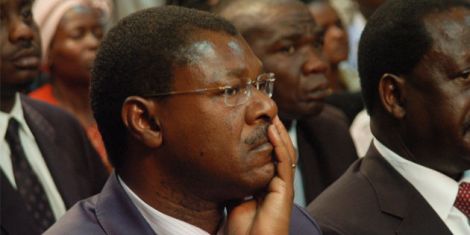 In the wake of the fake gold scandal, Bungoma Senator Moses Wetangula’s involvement in graft cases in the past have resurfaced.

The Ford Kenya leader, who also poses as a 2022 presidential aspirant has recently had to go mute as he is implicated in the fake gold scandal.

This led to a re-examination of the 62-year-old’s controversial political career online.

But he cannot be charged because Uhuru Kenyatta @RailaOdinga and @FredMatiangi are PARTNERS in crime.

In an investigative documentary aired on BBC, Wetangula, who was Trade Minister in 2012, features in court documents that revealed senior politicians who had been bribed by BAT.

The report indicated that the tobacco company paid for a business class return flight for the Bungoma Senator to London, where he was hosted at the company’s headquarters.

“It was explained to me in Africa that’s the cost of doing business,” said Paul Hopkins, a former BAT employee in Kenya.

He in 2010 left his Foreign Affairs ministerial post due to ongoing investigation on an involvement with the Kenyan Tokyo embassy scandal.

It was alleged that instead of accepting free property from the government of Japan for the embassy, 1.6 billion shillings was withheld from the sale of Kenyan property in Nigeria and used to buy a less suitable property, under his leadership.

Chaos still befall the senator as he is now embroiled in the fake gold scandal.

Despite his several graft allegations rocking news channels, he has however never stood trial for that cases.

Yet again, the new scandal is still under investigations, with Kenyans waiting, or not, for yet another endless row.