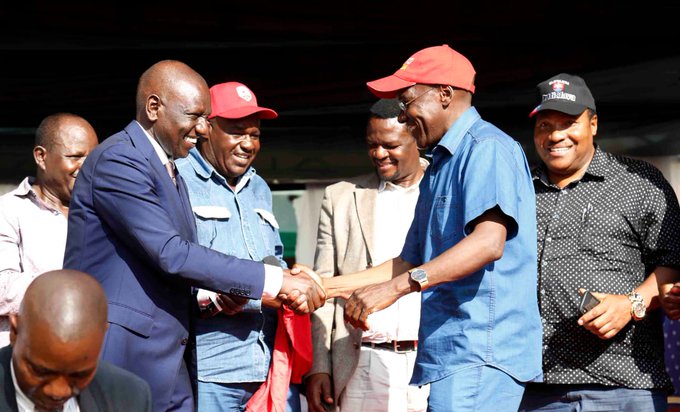 Has Former Kakamega Senator Boni Khalwale committed Political Suicide by joining the Jubilee Party? Has me made a great Political move?

Well, for sometime, the famous bull-fighter has been “flirting” with DP William Ruto and as such, it was expected that he would sooner or later make a move to Ruto’s “bedroom” permanently.

It therefore came as no surprise when he announced his defection from Ford-Kenya to Jubilee accusing his party of dictatorship as well as his desire to be in the next government.

He made the announcement at his Malinya home in Kakamega county Friday where he hosted Deputy President William Ruto.

His defection comes barely days after his party summoned him to face a disciplinary committee over misconduct for associating with and declaring support for Ruto’s 2022 State House bid.

Khalwale dismissed claims he had jumped ship to avoid the embarrassment of being kicked out of the Senator Moses Wetang’ula-led party.

“I will not be ashamed to find space for the Luhya people in the next government,” he said, adding that the community should abandon the opposition and join a team that would change the fortunes of Western Kenya region.

During the function, more than 30 Jubilee MPs said they will only support a review of the Constitution if it addresses the needs of ordinary Kenyans and not the political elite. They also scoffed at those claiming the referendum will happen whether Kenyans like it or not.

The leaders, who accompanied Ruto said it is Kenyans who will ultimately decide on the fate of the changes in the Constitution. “The problem is the greed from politicians. They want the amendment of the Constitution for their selfish gains,” said Malindi MP Aisha Jumwa.

Webuye West MP Dan Wanyama said the Luhya community was tired of empty politics, adding that it was time to change its political course and be in government.

“Despite our support for the Opposition, we have not benefitted much in terms of development. That is why I urge Musalia Mudavadi (Amani National Congress leader) and Moses Wetang’ula to join us, work with us and unite with other communities in forming the next government,” he said.

Governor Waititu urged Kenyans to embrace leaders who have a transformative mindset.

He said Mt Kenya would rally behind Ruto when he seeks to succeed President Uhuru Kenyatta in 2022 because of his development agenda as well as his bid to unite all Kenyans.

“For us to change our politics, we must build parties of national stature that would allow anyone to run for a seat without tribal biases,” he said.