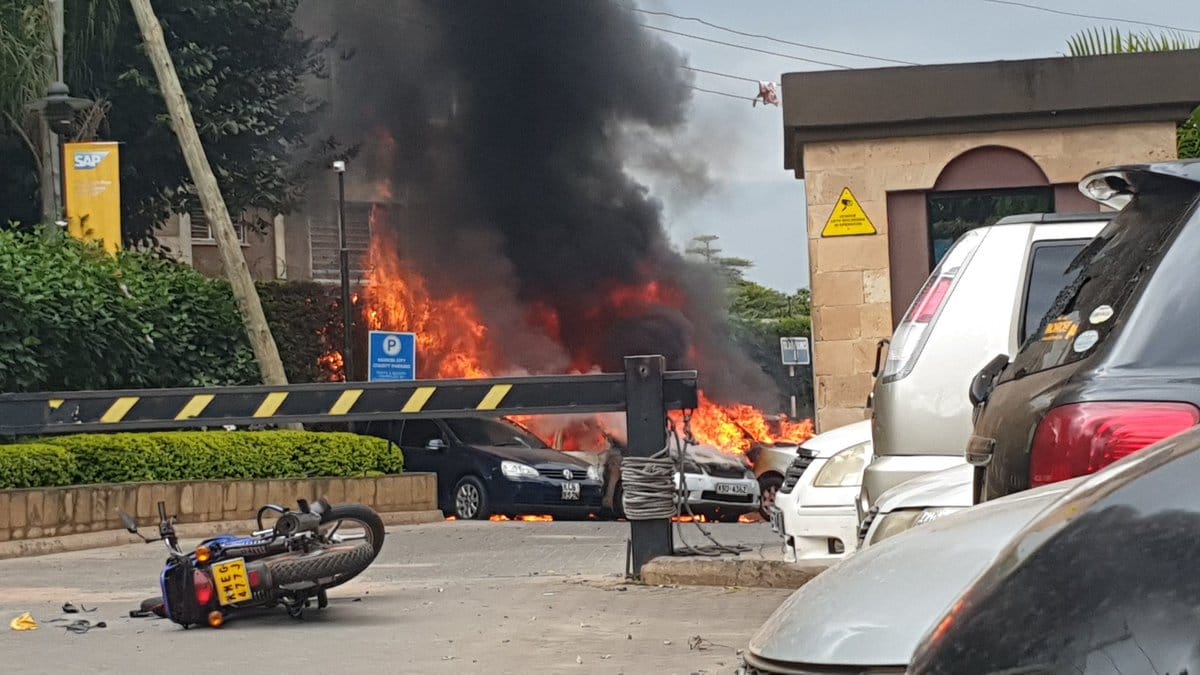 A Kenyan police officer who was among the first on the scene of the attack on an upscale hotel complex says “there was no time to count the dead but it is true that there are people who are dead.”

The officer says some bodies were in restaurants downstairs and that colleagues saw others in offices upstairs.

The officer says blood and glass are all over and that gunfire continues. The officer spoke on condition of anonymity because he was not authorized to speak to the press.

Kenya’s national police chief says they are aware some attackers could still be inside an upscale Nairobi complex and that special forces are trying to flush them out.

Joseph Boinnet did not confirm any deaths and did not give a number of people injured in the attack in the Westlands neighborhood.

The police chief says they suspect this to be a “terror attack” and he urges people to remain calm. He says that police are looking forward to “bringing the situation to normalcy in the shortest time possible.”

Kenyans are watching the police response closely after officers took hours to respond to a deadly attack on the nearly Westgate Mall in 2013. The attack on an upscale hotel complex in Kenya’s capital comes a day after a magistrate’s court ruled that three men must stand trial on charges they were involved in a deadly attack on a Nairobi shopping mall in 2013.

The magistrate said Monday he was satisfied with prosecutors’ evidence linking the three suspects to the days-long siege of Westgate Mall in which 67 people were killed. A fourth suspect was freed for lack of evidence. 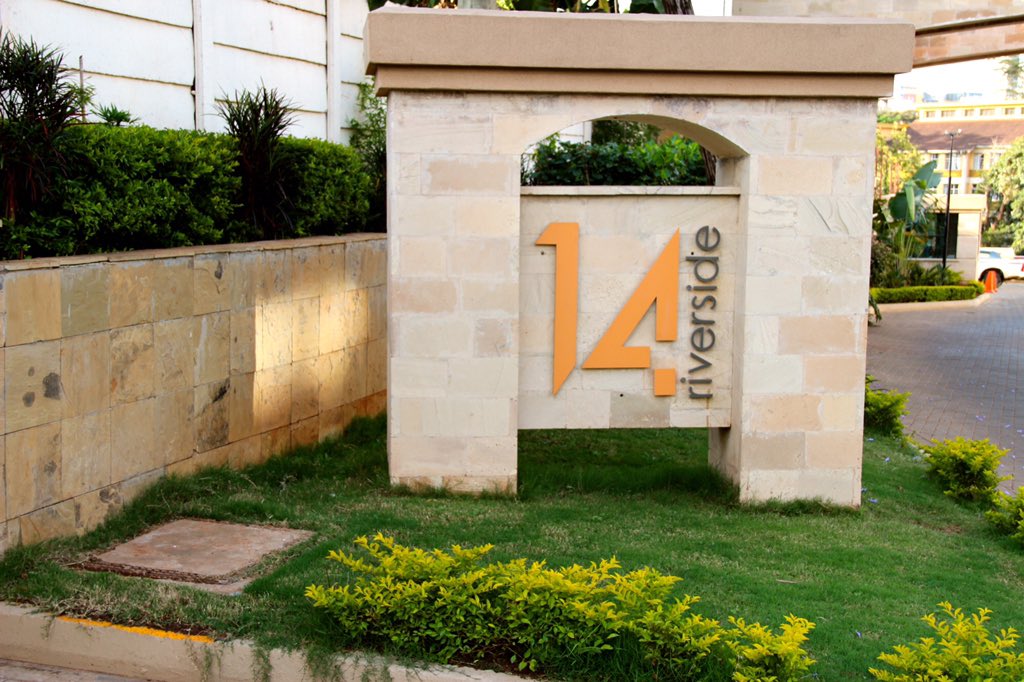 Police say they have detonated a car they said had explosives inside. The blast sent people at the scene of an attack on an upscale complex in Nairobi’s capital ducking and screaming.

Officers have moved away from other vehicles they suspect of having explosives.

Other officers have been going shop to shop in the complex in the Westlands neighborhood. It is a short walk from Westgate Mall, which was the scene of a deadly extremist attack in 2013.

The Somalia-based extremist group al-Shaba has claimed responsibility for this attack. 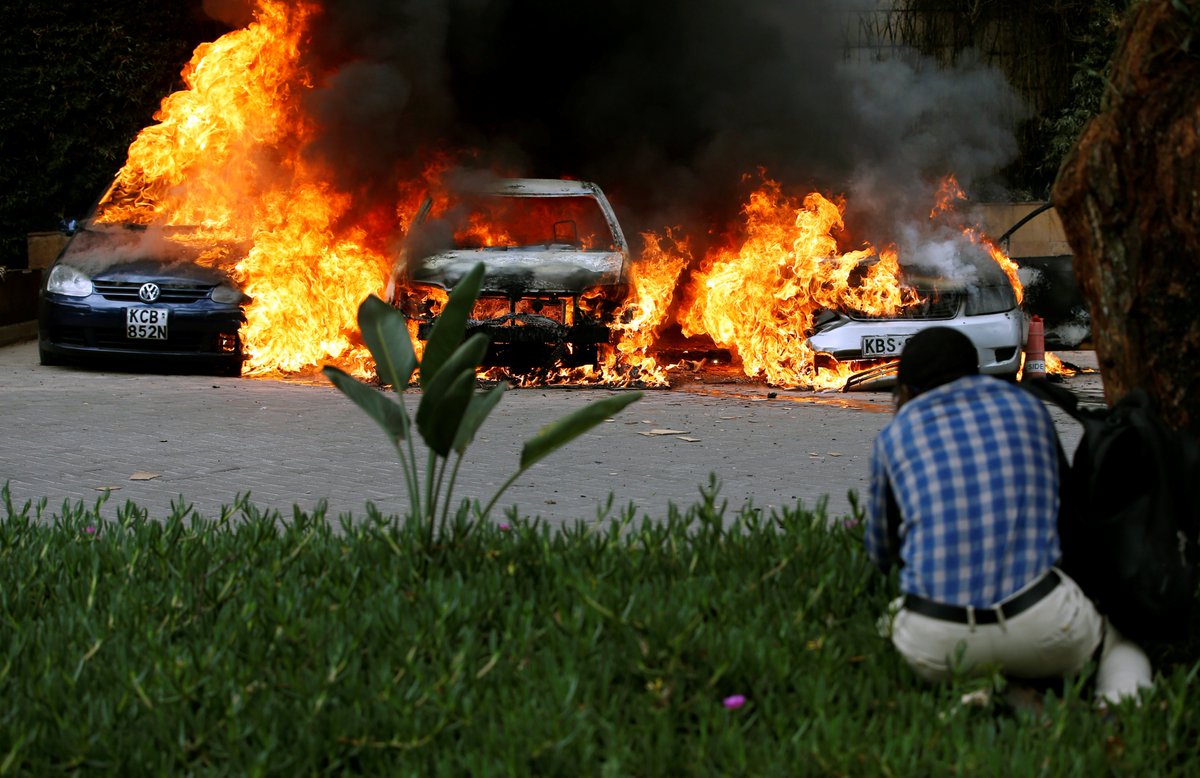 A witness says he saw at least two bodies at the scene of an attack on an upscale hotel complex in Kenya’s capital.

He says he saw attackers wearing green and wrapped in ammunition. It was not clear how many people attacked. The Somalia-based extremist group al-Shabab is claiming responsibility for the attack and said its members are still fighting inside.

Gunfire continues to be heard at the scene, sending some people ducking behind cars and screaming.

The Somalia-based extremist group al-Shabab is claiming responsibility for the attack on an upscale hotel complex in Nairobi and says its members are still fighting inside.

The al-Qaida-linked group issued the claim via its radio arm, Andalus.

Explosions and gunfire have been heard at the complex in the Westlands neighborhood as dozens of people are rushed from the scene.

At least one person in bomb disposal gear can be seen. An unexploded grenade has been seen in a hallway of the shopping complex. 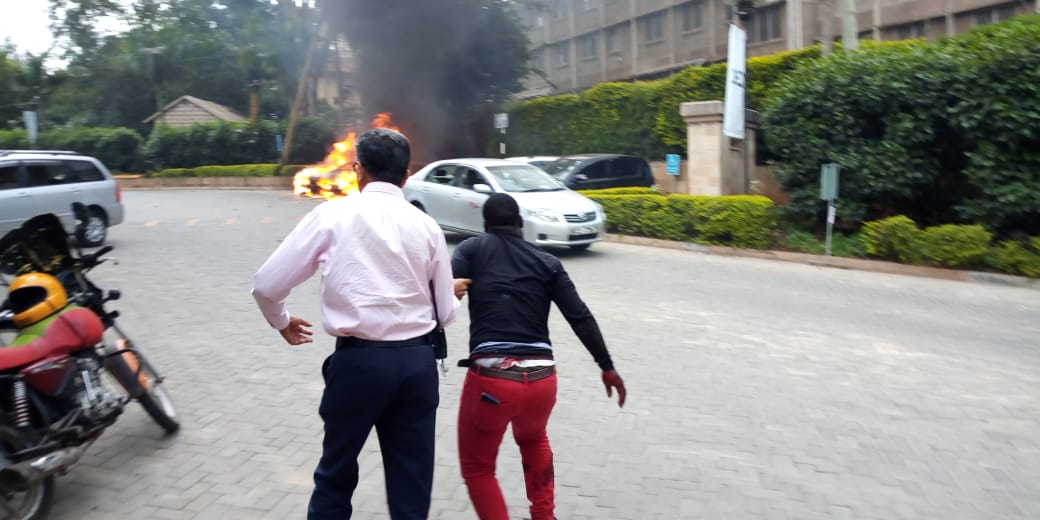 Civilians, including some women crying, ran away from the Nairobi hotel complex as sporadic gunfire was heard inside. One man escaping the attack, said he was hiding inside until he could run away. He said there was lots of shooting inside the complex. 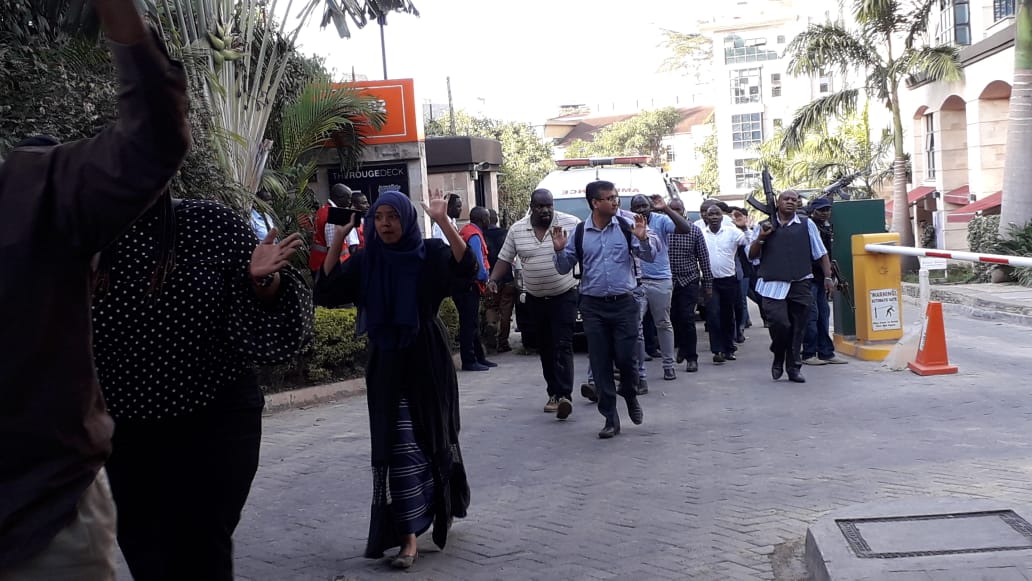 An armored vehicle has arrived at the ongoing attack on the DusitD2 hotel complex in Nairobi’s Westlands suburb on Riverside Drive. Police and army are at the scene. Plainclothes police are going from shop to shop to clear out trapped civilians who are running away from the complex.

As a car bomb smolders outside the gate, sporadic gunfire can be heard coming from the complex.

An upscale hotel complex in Kenya’s capital is under attack, with a blast and heavy gunfire. Witnesses and police at the scene are calling it a terror attack.

The complex in Nairobi includes a large hotel known as DusitD2, banks and offices. Several vehicles are burning. People are being rushed and carried from the scene.

Police spokesman Charles Owino says that “we have sent officers to the scene, including from the anti-terrorism unit, but so far we have no more information.” 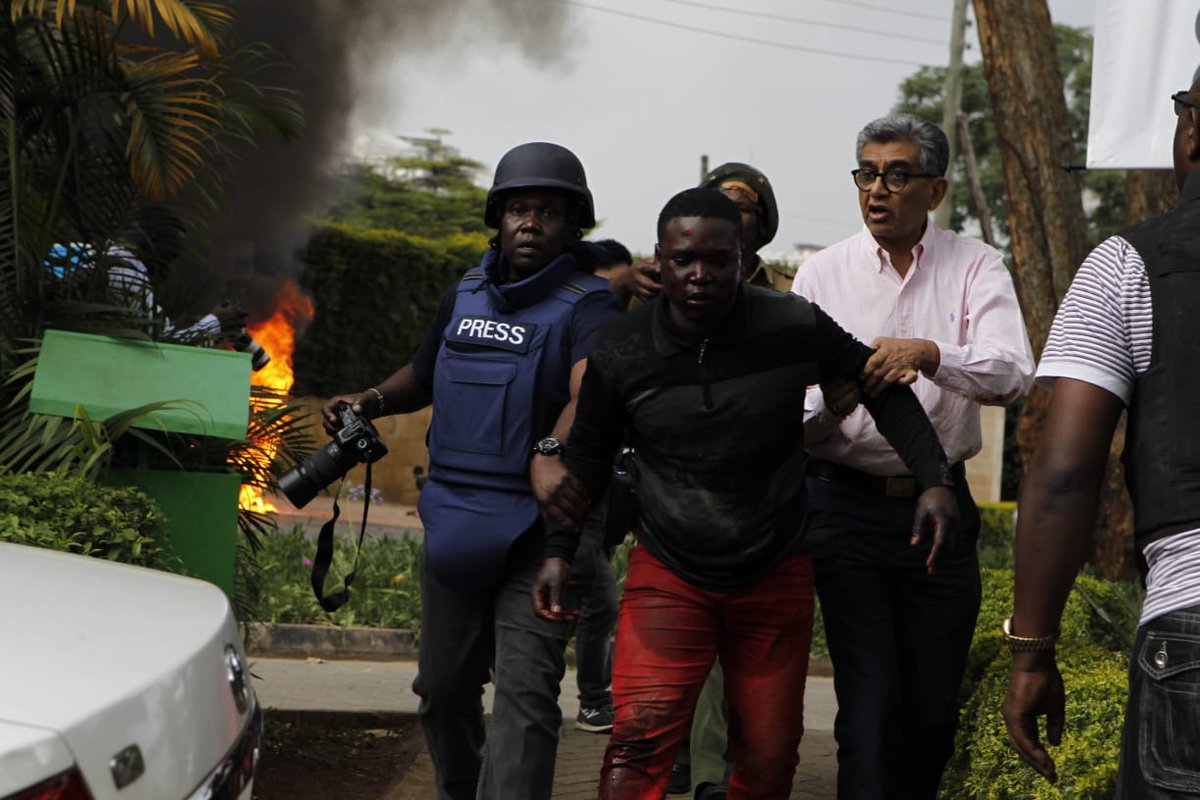 Ambulances, security forces and firefighters have rushed to the scene, sirens wailing. A large group of women have been hurried out by security forces, one woman still in hair curlers.

What appear to be plainclothes security forces are seen inching their way toward the scene, guns in hand. Helicopters can be heard. Other people appear to be taking cover behind fountains and other features in the lush outdoor complex.